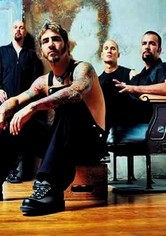 2004 NR 1h 4m DVD
With hits such as "Trippin'," "Reefer Headed Woman" and "Serenity," Godsmack established itself as one of the most popular heavy metal bands to emerge during the 1990s. This release celebrates the group's first 10 years. Featuring an acoustic performance captured at the House of Blues in Las Vegas, the film showcases vocalist Sully Erna, bassist Robbie Merrill, guitarist Tony Rombola and drummer Shannon Larkin rocking it to the rafters on a 12-song set.