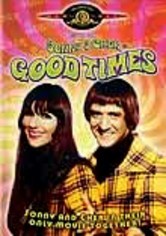 1967 NR 1h 32m DVD
Sonny and Cher, those icons of glitzy 1970s pop music, star as themselves in this musical comedy. When a top-dog movie producer tells the musical pair he wants to turn them into movie stars, Sonny fantasizes about possible plots for their debut film. Songs include "I Got You Babe," "It's the Little Things," "Good Times," "Trust Me," "Don't Talk To Strangers," "I'm Gonna Love You" and "Just a Name." Also stars George Sanders and Norman Alden.