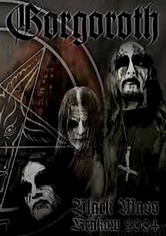 2004 NR 1h 0m DVD
Already on the map as one of Europe's most controversial metal acts, Norway's Gorgoroth made headlines around the world with this 2004 concert from Krakow, Poland. Their use of severed sheep heads, animal blood and nude "sacrifices" nearly led to the group's imprisonment, and much of this footage was originally confiscated by Polish authorities. Tracks include "Incipit Satan," "Revelation of Doom," "Destroyer" and "Blood Stains the Circle."