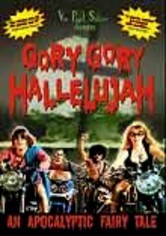 2003 NR 1h 40m DVD
Four actors -- a black revolutionary, a bisexual hippie, a Jew and a woman -- compete for the role of Jesus in an upcoming film. When all four fail to make the grade, they set out on their motorcycles to go audition for a production of "Jesus Christ Superstar." But after running afoul of a gang in a small town, they're victimized by an evil conspiracy that can only lead one way: down! Stars Tim Gouran, Todd Licea, Tony Doupe and Paige Green.