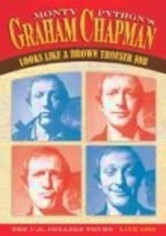 2005 NR 2h 0m DVD
Graham Chapman -- a founding member of the famed Monty Python troupe -- began a second career as a public speaker in the early 1980s, touring hundreds of colleges throughout North America to deliver "comedy lectures." His final tour before his death in 1989 is captured here in this hilarious collection of memorable moments, videotaped under the comic's supervision and culled from his personal archives.