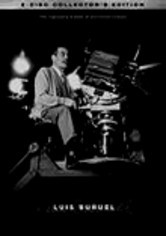 1947 NR 1h 32m DVD
Oscar-nominated filmmaker Luis Buñuel's first feature-length movie tells the story of Gerardo (Jorge Negrete) and Demetrio (Julio Villarreal), two escaped convicts who persuade a rich and powerful oil magnate to hire them. Their attempt to fit in and lead new lives is derailed when their boss goes missing, and his sister Mercedes (Libertad Lamarque) suspects the pair had a hand in it -- despite her growing attraction to the handsome Gerardo.