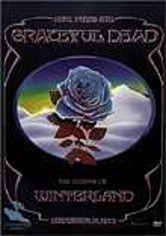 1978 NR 2 discs
When the world-famous Winterland arena closed its doors in 1978, rock promoter Bill Graham commemorated the event by organizing a farewell concert -- and he chose his favorite band, the Grateful Dead, to bring the party to a smokin' close. This video marks the 25th anniversary of the legendary show, featuring appearances by Lee Oskar, Ken Kesey, and John Belushi and Dan Aykroyd as the Blues Brothers.