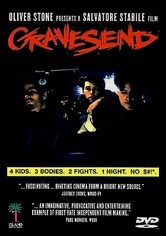 1997 R 1h 25m DVD
A Saturday night in Brooklyn turns chaotic for four friends after an accidental shooting in this edgy black comedy directed by Salvatore Stabile. One minute they're hanging out in Ray's (Michael Parducci) basement, and in the next Ray's older brother has been shot. Soon, the death count is at three, and the buddies are cruising the streets with a trunk-load of corpses, unsure of what's happened or what to do next.