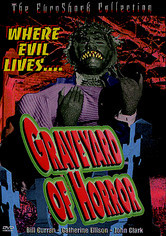 1971 NR 1h 26m DVD
Dead beings and a bloodsucking lizard-man populate this atmospheric and bizarre European Gothic shocker. Scientist Michael Sharrington conducts strange experiments with the transmutation of human cells, which involves hibernating bodies and pumping chemicals into the bloodstream. One night, he decides to perform these tests on himself and winds up buried in the local cemetery. When he returns to consciousness better run and hide!