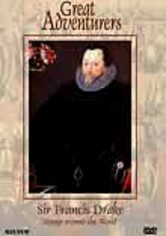 1999 NR 0h 50m DVD
From his early career as a privateer to his secretly commissioned expedition by Queen Elizabeth I, this documentary explores the life of famed British navigator and explorer Sir Francis Drake. Drake's many accomplishments include being the first Englishman to circumnavigate the globe and the man credited with defeating the Spanish Armada in 1588. This fascinating film includes footage shot aboard a replica of his celebrated ship, the &NFiGolden Hind&NFi_;.