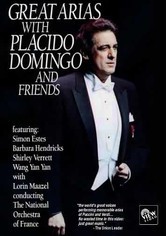 1989 NR 0h 50m DVD
In this benefit concert, presented at UNESCO in Paris, celebrated tenor Placido Domingo is joined on stage by Shirley Verrett and Simon Estes, among others, to perform a selection of arias from Verdi and Puccini. Highlights include "Non Sono Tuo Figlio'' from "Il Trovatore"; "Quando le Sere al Placido" from "Luisa Miller"; "Credo" from "Otello"; "Senza Mamma o Bimbo" from "Suir Angelica"; and "Vissi D'arte" from "Tosca."