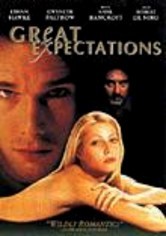 1998 R 1h 56m DVD
Aloof and seemingly unattainable to Finn since their youth, Estella holds his fascination. As an adult, Finn becomes obsessed with turning his hardscrabble life into a success all to gain her love.

Parents need to know that Great Expectations (1998) is one of many retellings of the classic Dickens' novel, with this one set in modern times on the Gulf Coast. This version greatly simplifies the plot, mostly focusing on the twisted romance between Estella and Pip (called Finn in this version) and cutting out a lot of the details of Pip's difficult journey to adulthood. This is a very mature version best for older teens and up, so expect a lot of swearing ("f--k" and "s--t" are sprinkled liberally throughout) and some violence (a character is stabbed and dies from his wounds). There's also a focus on sex and the growing sexual tension between Estella and Finn that starts with a French kiss between tweens. As teens they share one sexually charged scene that shows a shot up Estella's dress to her underwear, and as adults Finn draws Estella naked (she poses first in underwear, then fully naked with bare buttocks shown), and one sex scene shows Estella naked (bare breasts and buttocks). There's also some drinking and a lot of smoking. The themes of learning the futility of fame and fortune if you don't have love or family, which are strongly emphasized in the novel, are mostly overshadowed by Finn's consuming love for Estella in this version.

Lustig threatens to gut Finn like a fish. His bloodied ankles are shown close-up. A character is stabbed and dies from his wounds.

Ms. Dinsmoor teaches Estella to deceive men and break their hearts. They both eventually learn the error of their ways but not before causing heartbreak. A message of forgiveness is emphasized as Joe forgives Finn for treating him badly, Finn forgives Estella and Ms. Dinsmoor. Finn learns money and fame are empty without family and happiness.

Reference to prescription drugs, birth control. Ms. Dinsmoor and other characters smoke and drink beer or cocktails throughout. Party guests drink champagne. Finn drinks champagne straight out of a champagne bottle when he's upset. The convict Lustig drinks whiskey and pours it on his wounds.