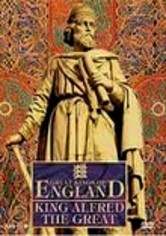 2000 NR 0h 50m DVD
Using location footage, historical re-creations and authoritative commentary, this engrossing documentary profiles Alfred the Great, who governed the Anglo-Saxon kingdom of Wessex between 871 and 899. Famous for his defense against the Danish Vikings, the extraordinary Alfred organized his forces into a standing army, built a navy, laid the groundwork for England's unification and encouraged education for his subjects.