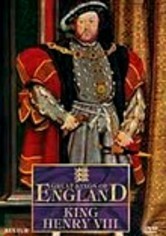 1994 NR 0h 50m DVD
Through dramatic re-reations and expert analysis, this fascinating documentary traces the life of King Henry VIII, the colorful monarch who ruled England and Ireland from 1509 until his death in 1547. Henry ruthlessly expanded the royal government's power, which he used to launch the country's Protestant Reformation after breaking with the Catholic Church. Famed for his marital problems, Henry wed six times, "divorcing" two wives via execution.