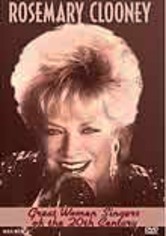 2000 NR 1h 0m DVD
Popular jazz singer and actress Rosemary Clooney had a career spanning six decades, recording with musical legends such as Benny Goodman, Tony Bennett and Duke Ellington, and winning a Lifetime Achievement Grammy Award in 2002. Filmed live at Chicago's Drury Lane Theatre in 2000, this concert was one of Clooney's last recorded performances before her death in 2002. The nine-song set includes her hits "Hey There" and "Come on to My House."