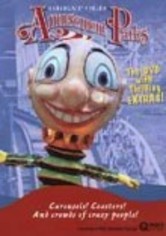 1999 NR 1h 0m DVD
Documentarian and amusement park enthusiast Rick Sebak takes his cameras around the country to visit many of America's oldest and longest-running amusement parks, from Connecticut's Lake Compounce to California's Santa Cruz Beach Boardwalk. Highlights include the Derby Racer at Playland, the Boat Chute at Lake Winnepesaukah, Deno's Wonder Wheel at Coney Island, Kennywood's Thunderbolt, the Cyclone at Astroland and the Raven at Holiday World.