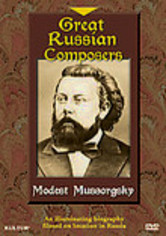 2007 NR 0h 24m DVD
This insightful presentation documents the life and career of Modest Mussorgsky, one of Russia's most celebrated nationalist composers. From his early beginnings in the military, which stirred his patriotic spirit, to his later focus on his music, including "Pictures at an Exhibition" and the opera "Boris Godunov," every aspect of the celebrated musician's work -- and the political and social environment that formed it -- is examined.