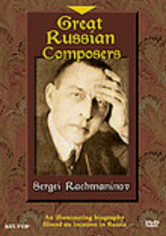 2007 NR 0h 23m DVD
This documentary explores the life and career of Sergei Rachmaninov, one of Russia's most revered composers, conductors and pianists of all time. From his early training at the Moscow Conservatory to his famous works "Symphony No. 2" and "The Isle of the Dead" to his eventual emigration to the United States, every aspect of the celebrated musician's work -- and the political and social environment that formed it -- is examined.