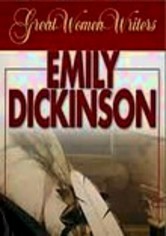 2001 NR 0h 45m DVD
This installment of the Great Women Writers series celebrates American poet Emily Dickinson's works by reciting passages against the backdrop of rare archival photographs and authentic period imagery. Though she wrote more than 2,500 poems during her lifetime -- verses that reveal singular talent and complexity -- Dickinson (1830-1886) chose to publish only seven, making her one of the most reclusive American writers of all time.