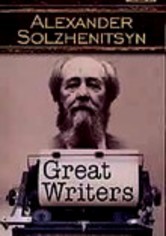 2001 NR 0h 45m DVD
This installment of the Great Writers series celebrates Russian author Alexander Solzhenitsyn's work by reciting portions of his famous novels, including &NFiOne Day in the Life of Ivan Denisovich&NFi_;. Known for his scathing literary exposés of the Soviet prison system in the 1960s and '70s, Solzhenitsyn was exiled from his own country and labeled a traitor. Yet the world awarded him a Nobel Prize for his efforts, and in 1994, his citizenship was restored.