Greatest Adventures of the Bible: Moses 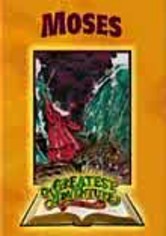 Greatest Adventures of the Bible: Moses

2006 NR 0h 27m DVD
Be there when one of the greatest liberators of the Old Testament -- Moses -- frees the enslaved Jews of Egypt and leads them out of Pharaoh's bondage to the Promised Land of Israel. Witness the horrific plagues that Moses calls down upon the Egyptians, the parting of the Red Sea and Moses' eventual triumph against Pharoah and his army -- a victory that would lead the Jews to Mount Sinai, where they would receive the Ten Commandments from God.