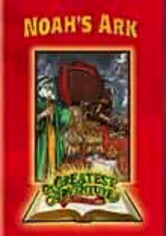 2006 NR 0h 26m DVD
This enthralling animated story re-creates the greatest rainsquall in world history -- the biblical flood that wiped out corruption and wickedness so that humanity could begin again in God's good graces. Only the family of the righteous, penitent Noah was spared. Called by God, the faithful Noah built an enormous ark, and filling it with two of every animal, weathered the torrent that rained down on Earth for 40 days and 40 nights.