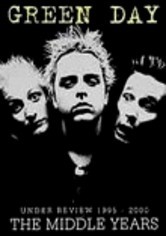 2007 NR 1h 8m DVD
Casting a critical eye on the music produced by pop-punk phenoms Green Day from 1995 to 2000, this documentary program includes rare interviews and insights from rock critics, journalists, fans, industry insiders and friends of the band. The group's "middle years" proved remarkably fertile, a period that saw the trio develop their musicianship and songwriting skills. This release also features live and studio performances from the alt rockers.