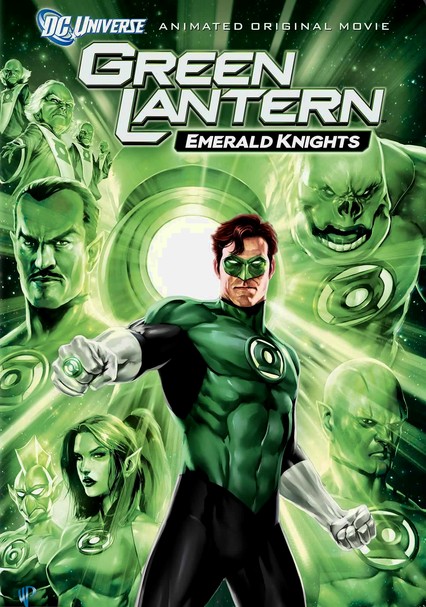 2011 PG 1h 24m Blu-ray / DVD
Geek god Nathan Fillion fills in as the voice of Green Lantern Hal Jordan in this animated six-story anthology of adventures built around the crime-fighting prowess of the intergalactic Green Lantern Corps (and based on the popular DC Comics characters).

Parents need to know that this animated feature film is rated PG but is consistently violent, with fights and battles throughout. Some weapons are drawn, but only some blue alien blood is seen. Most of the fights use either Green Lantern power rings or martial arts-style punching and kicking. Language includes gateway words like "damn" and "hell."

This is a fairly violent movie, with several fights and battles. Blades are used in battle, but blood is drawn in only one scene (and it's blue alien blood). Mostly the battles consist of Green Lantern power rings and martial arts-style punching and kicking. Some characters die, and some other, darker sequences could be somewhat frightening to younger viewers.

The movie has fairly frequent language, including "damn" and "hell," as well as "frigging bastards," "crap," "stupid," "my God," and "son of a cur." Additionally, a made-up word, "poozers," is used quite often.

Characters debate the existence of destiny/whether people make their own choices. One character makes assumptions and learns that things aren't always as they appear. Other characters argue about loyalty to your family versus the impulse to do the right thing. Most characters come out wiser from their experiences.