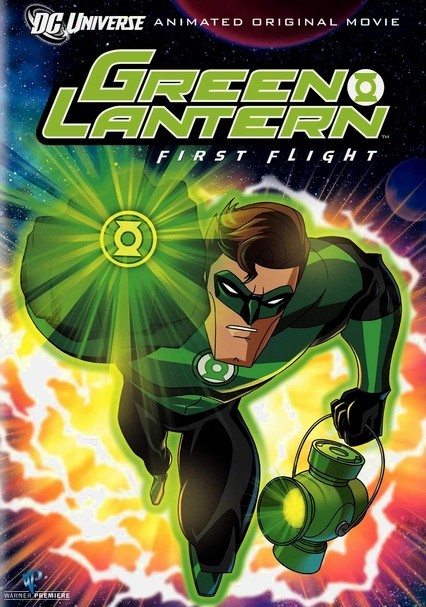 2009 PG-13 1h 17m Blu-ray / DVD
While under the tutelage of senior Green Lantern member Sinestro (voiced by Victor Garber), test pilot Hal Jordan (Christopher Meloni) learns that key members of the intergalactic police squad are conspiring to destroy the organization from within. Despite his inexperience, Hal sets out to thwart the traitors and preserve the Lantern Corps' sanctity. Michael Madsen and Tricia Helfer also lend their voices to this animated sci-fi adventure.

Parents need to know that this animated film is a bit darker than most superhero cartoons. The villain, Sinestro, uses violence to intimidate people, tortures suspects, and isn't above murdering his allies if they no longer fit into his plans. This casual brutality and menace makes him seem a shade more evil and more intense than most bad guys as he plots to rule the universe. There's some minor swearing and even a scene that seems to involve an alien drug, so the film is probably a bit too much for younger viewers.

Plenty of animated action, all typical for a superhero series. What is not typical is the villain, Sinestro, who is willing to use force and intimidation when questioning people, tortures suspects, and even murders people who get in the way of his nefarious schemes. Though there's little graphic blood or gore, some of the sequences showing his casual violence are a bit darker than the average comic book fare.

Evil never wins, and though sometimes it seems like all is lost, teamwork, courage, and loyalty will always prevail.

One scene takes place in an intergalactic bar, though it's not exactly clear what the patrons are drinking. Sinestro also seems to be using a strong drug to question someone, forcing her to take much more than the average dose, causing her obvious pain.