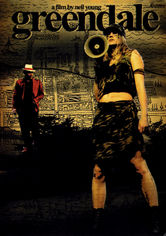 2004 UR 1h 27m DVD
It's a clash of cultures and mindsets when the "Green family," a Northern California commune of ex-hippies, eco-activists and criminals, butts heads against the encroachments of outside society (read: the modern world). Directed by Neil Young (credited as Bernard Shakey), the film -- a musical drama of sorts -- stars Eric Johnson, Ben Keith, Elizabeth Keith, Erik Markegard and James Mazzeo. Think of it as a Marin County version of Witness.