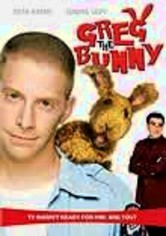 2002 NR 2 discs
Seth Green and Eugene Levy star in this high-concept, hilarious but little-seen series that first aired on the Fox channel. A puppet bunny named Greg (voiced by Dan Milano) lives with his best pal, Jimmy (Green), whose dad, Gil (Levy), produces a children's show called "Sweetknuckle Junction." All Greg wants is a job, so he rejoices when he gets a role on Gil's show; unfortunately, it's on the brink of cancellation.

Parents need to know that just because this comedy features puppet characters, like Sesame Street, it's not aimed at children. The jokes are risqué and the situations involve such mature themes as jealousy, prejudice, disappointment, and office politics. Some scenes include puppets and humans drinking and there are many references to being drunk or high. Though there's no sex, there are plenty of suggestive comments and some mild swearing. This is best for older teens and up who can understand the satire.

No sex or nudity, but plenty of suggestive comments and innuendo.

Though meant as satire, bitterness, jealousy, racism, and carrying petty grudges are universal in this series as it pokes fun at society's prejudices through the use of puppets who face discrimination as second-class citizens. The show finds humor in drug and alcohol use as well as toilet scenarios.

References to taking drugs, being high, and being very drunk. Some scenes feature characters drinking in bars.