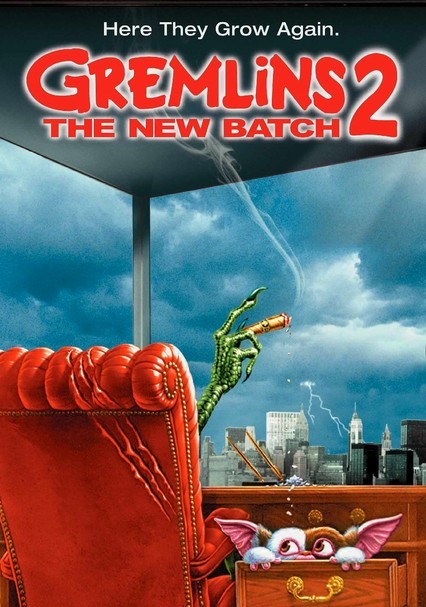 1990 PG-13 1h 47m DVD
Young sweethearts Billy (Zach Galligan) and Kate (Phoebe Cates) move to the Big Apple, land jobs in a high-tech office park and soon reunite with the friendly and lovable Gizmo. But a series of accidents creates a whole new generation of Gremlins. The situation worsens when the devilish green creatures invade a top-secret laboratory and develop genetically altered powers, making them even harder to destroy!

Parents need to know that Gremlins 2: The New Batch is the 1990 sequel to the hit '80s movie. It's more entertaining than one might expect, but much of that entertainment comes from cartoonish violence in the form of gremlins spending the last hour of this 90-minute movie running amok in a Manhattan high rise similar to Trump Tower. While not as gory as other horror movies, some of the gremlin deaths -- for instance, a gremlin getting killed via a paper shredder -- might be a bit much for younger viewers. Some of the satire of 1980s-style greed will also go over younger viewers' heads, as well as references to Ted Turner's attempts at colorizing classic black and white films in the late 1980s. There's mild profanity and a few mild sexual references. A troubling aspect worth mentioning is the stereotypical portrayal of an Asian character who does nothing but speak in broken English while taking nonstop photographs with his camera.

A woman makes sexual advances on a man at dinner by rubbing her foot against his groin area. A woman asks if a man is hiding pornography in a drawer in his cubicle.

While there's mostly cartoonish violence, and a lot of it, there are some moments in the film that might be scary for younger viewers. A gremlin is shot in the head by another gremlin. A gremlin is killed when a man shoves him into a paper shredder, resulting in thick green goo spraying all over the man's suit.

As a slapstick farce of a horror movie, there isn't much in the way of positive messages.

Gremlins build a gremlin out of Legos. A can of Jolt Cola is prominently displayed. Scenes in bars feature neon signs advertising Coors Light and Busch beer.

An elderly Asian man smokes from a long pipe. The boss of one of the main characters is frequently seen smoking or lighting up a cigarette. Characters drink beer and cocktails at dinner. Dozens of gremlins take over a bar and are shown drinking and smoking. A chef on a television program drinks from a bottle of sherry.