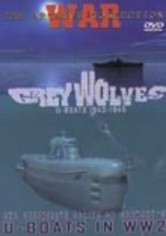 2005 NR 1h 0m DVD
The scourge of the Atlantic Ocean during World War II, Hitler's U-boat "Wolf Packs" were described by Winston Churchill as his greatest fear. And these roving bands of submarines quickly became the biggest threat to England, cutting the country off from vital supply routes and almost starving it into submission. This documentary traces the final years of the U-boat war from 1943-45 with memorable images collected from captured German footage.