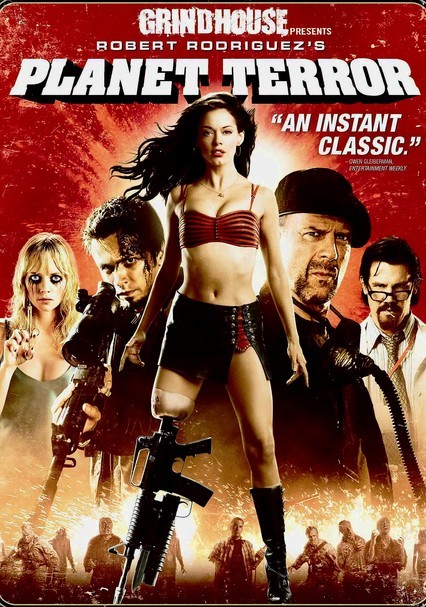 2007 NR 1h 45m Blu-ray / DVD
In this extended version of Robert Rodriguez's Planet Terror, El Wray and his ex, Cherry Darling, fight off a zombie army infected with a biochemical weapon that was unleashed by a psychotic Army lieutenant and an opportunistic scientist.

Parents need to know that this tongue-in-cheek zombie gorefest celebrates and partially re-creates the brutal sex-and-action "exploitation" movies that played in bad-neighborhood theaters from the 1960s through the '80s. That means it luxuriates in blood-soaked violence and sexually suggestive sleaze and has loads of swearing, carnage, and erotica (though actual nudity is brief). It's a campy takeoff, but the humor is quite gruesome, not the goofy silliness found in Scary Movie-type parodies.

Brief toplessness early on in the phony trailer for Machete and in strip-club dressing room. "Artful" near-explicit nudity in a love-scene montage (interrupted by a "missing reel"). Female characters dress skimpily in shorts and tight tops, and there are glimpses of what are supposed to be diseased, decayed, and mutated male testes. Lots of suggestive exotic dancing. Discussion of lesbian relationship.

Almost every possible mutilation is on display (including actual forensic photos). Pus-oozing zombies eat people, get dismembered, and burst into bloody messes. One of the victims is a little boy who accidentally shoots himself accidentally; a pet dog is run over by a convoy. The female lead loses her leg to zombie cannibals and replaces it with a gun and rocket launcher. Attempted rape.

While the Hispanic and white characters are treated equally (a Robert Rodriguez trademark), they're still B-movie caricatures of rogues, strippers, outcasts, maniacs, etc. The women are as tough as the men (though they're also heavily sexualized). The movie's murderous military marauders turn out to be military troops.

Social drinking in a bar scene; talk of drugs.