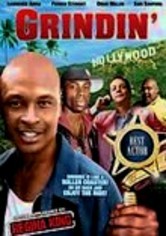 2007 NR 1h 30m DVD
Working Hollywood actor T.O. (Lawrence B. Adisa) was on his way up -- until his hard-partying lifestyle waylaid his dreams. Now, an important audition gives T.O. a shot at redemption. But he'll have to pull himself together and outdo his rival, Morris (Sam Sarpong). With celebrity friends such as Regina King and French Stewart (both playing themselves) giving him guidance, T.O. works to regain his focus and win the role in this Tinseltown comedy.