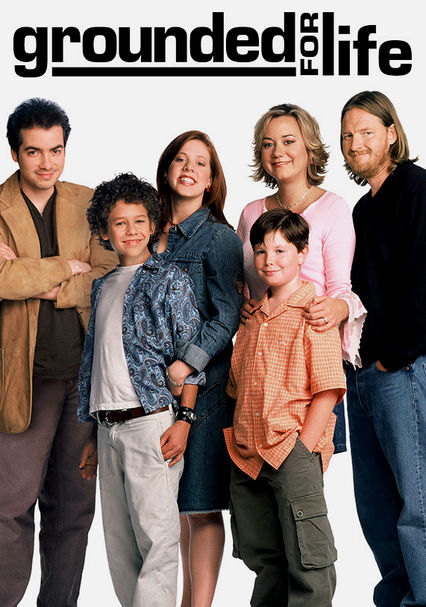 Getting married and having a baby at age 18 was only the first in a long line of challenges for harried 30-somethings Sean (Donal Logue) and Claudia (Megyn Price), who are now the seasoned parents of two more children (Griffin Frazen and Jake Burbage). In the second season of "Grounded for Life," Claudia secretly starts smoking and buys her daughter's silence with the promise of a cell phone, and Sean makes peace with his cousin's ashes.

Although harried parents Sean (Donal Logue) and Claudia (Megyn Price) Finnerty -- who got married when they were only 18 -- are now firmly planted in their 30s, raising their three kids hasn't gotten any easier. The third season of this offbeat sitcom finds Sean being forced to wear a dress, Claudia getting hooked on violent video games and Jimmy (Griffin Frazen) and Henry (Jake Burbage) gorging themselves on hot wings.

This hilarious sitcom stars Donal Logue and Megyn Price as Sean and Claudia Finnerty, a thirtysomething couple who bid a quick farewell to their adolescence when they got married and started having children at age 18. In the fourth season of the Emmy-nominated series (which now airs on ABC Family), the family reaches out to the homeless; Claudia somehow ends up at a frat party; and the PTA tries to close down Sean's bar.

Returning for a final season of the Emmy-nominated series, the offbeat Finnertys continue to struggle with their lives and relationships as they learn what it means to be a family. In Season 5 developments, Sean (Donal Logue) finds out that Claudia's (Megyn Price) pregnant before she does -- and then starts having sympathetic pregnancy symptoms. Meanwhile, Lily (Lynsey Bartilson) has boy troubles and Jimmy (Griffin Frazen) goes vegan.

Parents need to know that while the kids' mother and father are loving and attentive, they often garner laughs with their sarcasm, immaturity, and tales of occasional carelessness. This might turn off adults who want their kids to be exposed to Married... With Children, this show isn't nearly as envelope-pushing as its predecessor, but it still might raise some eyebrows.

The parents and even their eldest child make sexual jokes. The oldest teenage daughter has called her parents "horndogs" and has a sexual relationship with her boyfriend. Strippers and pornography have cropped up from time to time.

The parents aren't much more mature than their teenage kids, offering questionable role models. But the underlying messages is that it's important to maintain family ties because you're always going to need your family to look after you.