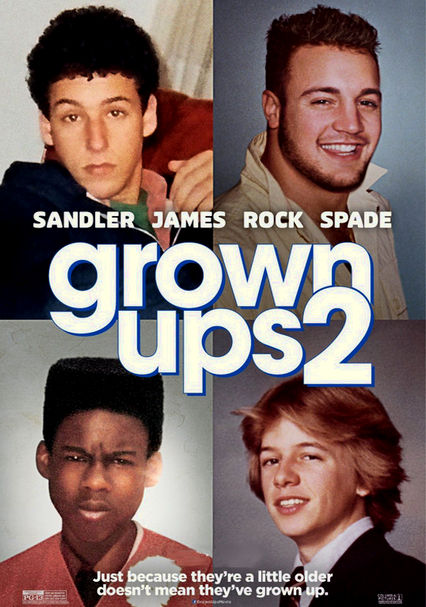 2013 PG-13 1h 41m Blu-ray / DVD
After moving his family back to his hometown, Hollywood talent agent Lenny Feder and his grown-up childhood friends learn lessons from their kids -- and some of the locals -- on the last day of school.

Parents need to know that Grown Ups 2 is the lackluster sequel to the 2010 comedy starring Adam Sandler, Chris Rock, David Spade, and Kevin James as a group of middle-aged best friends. This time around, surly college frat boys are the quartet's nemeses. Just like the first outing, this comedy relies on generous helpings of crass humor (some of it pretty sexist), slapstick violence, strong language (including "ass" and "d-ck"), and some partial nudity (mostly male backsides, though there are references to penises, as well as masturbation references and other innuendo). You can also expect a fair bit of drinking/drunkenness during raucous parties. The foursome have a strong friendship, but the movie's attempts at positive messages are mostly lost beneath the crude comedy.

Bullies young and old abound: A young boy is terrorized on a bus, and a drunk bus driver is tied up, tossed around, and thrown at a distance (for laughs). A teenager flashes a knife and beheads a stuffed animal. A massive melee pits college students against adults, with everyone jumping into the fray. Much of it is slapstick in nature.

The movie's underlying message is that friendship runs thicker than water -- and that having a supportive spouse at your side is a big help, too -- but there's plenty of crude comedy layered over those take-aways.

Lots of drinking/drunkenness during raucous parties. High school students are mistaken for college kids and handed beers (which they promptly pretend to drink but aren't really interested in doing so).