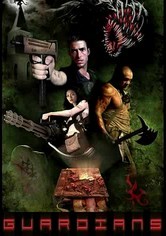 2006 NR 1h 29m DVD
Called in by a group of occultists, an army of horrific creatures descends on the small town of Twilight Cove. Now, the fate of the world lies in the hands of a clandestine group of mercenary exterminators known only as the Guardians, led by Alex (Shannon Watson). In existence for thousands of years, the highly trained secret society embarks on a mission to stop evil from another realm and save the human race. Tara Ketterer and Hemi Marcum co-star.