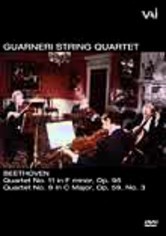 1999 NR 0h 58m DVD
Formed in 1964, the Guarneri String Quartet -- Arnold Steinhardt, John Dalley, Michael Tree and David Soyer -- has performed in the world's most distinguished recital halls. Besides collaborating with such esteemed artists as Artur Rubinstein, the group has been featured in documentaries and on radio and TV specials. On this concert disc, actor Hal Linden introduces the foursome, who plays composer Ludwig van Beethoven's Quartets Nos. 9 and 11.