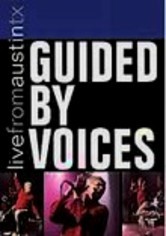 2007 NR 1h 37m DVD
For nearly two decades, Guided by Voices was a touchstone of the indie rock movement in America. This concert, part of PBS's "Austin City Limits" series, was one of the band's last before their 2004 breakup. The show was filmed at the University of Texas at Austin and features an impressive 30-song set list. Tunes include "Demons Are Real," "Gold Star for Robot Boy," "Do the Earth," "Buzzards and Dreadfall Crows" and "Girls of Wild Strawberries."