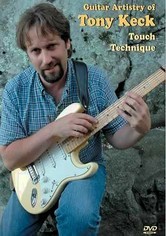 2007 NR 1h 4m DVD
Known for his unique style and genre-bending compositions, Tony Keck is a widely recognized, award-winning guitarist. To create his rhythmic, meditative style, Keck drew his inspiration from the blues and developed a sound all his own. Blending jazz and pop, blues and classical, Keck showcases his distinctive technique over the course of this 12-song set, which includes "Harlem Nocturne," "Sleepwalk" and "Sitting on Top of the World."