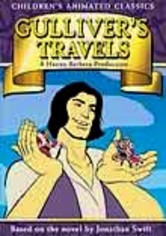 1979 NR 0h 50m DVD
The colorful minds at Hanna-Barbera -- best known for their classic Saturday morning cartoons -- breathe new life into Jonathan Swift's 18th century novel with this kid-friendly animated version. When an accident tosses him overboard, waterlogged sailor Lemuel Gulliver (voiced by Ross Martin) washes up on the shores of Lilliput, where he's initially feared by the pint-sized citizens but ultimately becomes a valuable asset.