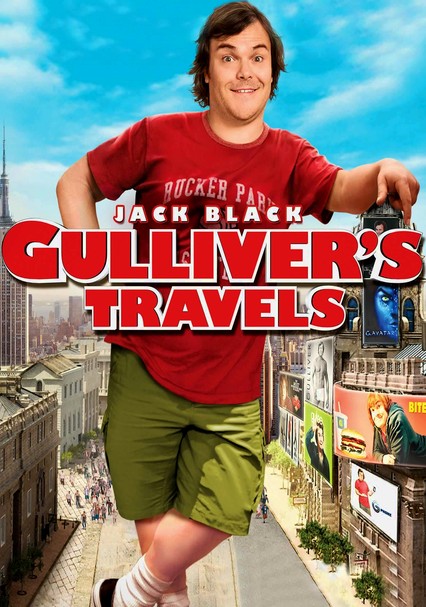 Parents need to know that this modernization of Jonathan Swift's classic satire features everything audiences expect from family-targeted Jack Black movies: physical (including potty) comedy, minor language, and lots of references to popular culture -- particularly movies and music. The sexuality is mostly tame, but there are references to a woman's breasts (as reason enough to marry her), some innuendo, and a few brief kisses. Language includes insults like "stupid" and "lame ass" (repeated several times in one scene). Expect several mentions of/allusions to Mac products, among other brand names. On the bright side, kids should learn about the value of honesty, believing in yourself, and looking beyond someone's status.

A couple of sweet kisses between two different couples in the story. Also some innuendo and references to romantic relationships and flirting techniques. For example, when Princess Mary asks her fiance what he likes about her, he points at her breasts, and she says "inappropriate." Gulliver convinces Horatio to woo Princess Mary by quoting Prince's song "Kiss." Gulliver refers to women as "stone cold foxes" and "babes."

Cartoonish violence in Lilliput, where the Lilliputians often have skirmishes with a neighboring kingdom. Gulliver fights one-on-one with an entire armada that fires at him, but his huge belly repels the bombs, and they charge right back at the enemy ships. Soldiers are shown jumping into the water (comic scene). In one scene, a soldier is accidentally crushed, but it's handled humorously. Gulliver surrenders after receiving a horrible "wedgie" from an oversized robot soldier he fights.

Messages about honesty, teamwork, and seeing people for their potential and not just their social status/job title are all positive. That said, there's also some potty humor: In one scene, Gulliver pees on a fire to put it out, and viewers see people who are covered in urine. And another scene shows a bit of Jack Black's "plumber's butt."

Products and brands represented or mentioned include Apple (the iPhone especially, but also MacBook and iTunes), Guitar Hero video game, and Mr. Coffee.