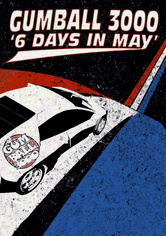 2004 NR 1h 9m DVD
Some of the most amazing cars ever built race across Spain and head south into Africa in the 6th Annual Gumball 3000 Rally. This film captures the 2004 race, which featured Ferrari Enzos, Hummers, Aston Martins and other rare autos. Behind the wheels are skateboard pros, supermodels, Saudi royals and billionaires. The thrills abound as they evade the law to be the first to cross the finish line at Cannes Film Festival.