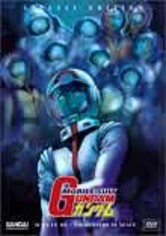 1998 NR 2h 33m DVD
With the conflict's end in sight, the Earth Federation prepares to take the war into the Duchy of Zeon's home territory. Gundam pilot Amuro Ray, now a seasoned veteran, returns to space for the final battle. There, he meets the mysterious Lalah Sune, a young woman who shares his Newtype abilities. Meanwhile, Amuro's adversary, Char Aznable, seeks to complete his secret quest for vengeance.