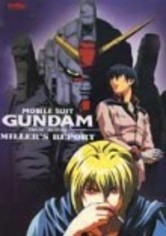 1996 NR 0h 55m DVD
As the evil Principality of Zeon marches toward victory in giant mobile armor, the Federation secretly perfects their own humanoid machines in the jungles of Southeast Asia. Shiro Amada, a rookie officer, gets a crash course in command as he leads the 08th Mobile Suit Team into battle against the Zeon. Set during the One-Year War, this chapter of the long-running anime series shows the Gundam battle through the eyes of the soldiers.