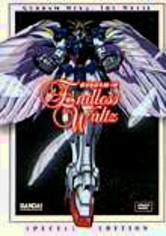 2000 PG-13 3h 0m DVD
Picking up the action one year after the conclusion of the "Gundam Wing" Japanese television series, Earth and the Space Colonies join forces to form the Earth Sphere Unified Nation. The Gundam pilots find themselves rebuilding their lives. In this new and peaceful era, they have sent their weapons of war into the sun to be destroyed, but when a high-ranking government official is kidnapped, the pilots get called back into action.