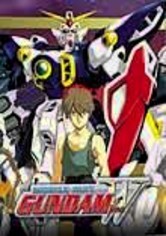 2000 NR 9 discs
When Earth's nations unite under the auspices of the Earth Sphere Alliance and take to the stars, it looks like smooth sailing -- until the alliance becomes corrupt, and tyrannical rule spills over into the colonies in this sci-fi anime series. Fearing the worst, the colonists initiate an offensive strike that will use suits fashioned from gundanium -- an indestructible alloy -- to protect themselves.

Parents need to know that this sci-fi animated series from Japan is perfect for preteens and teens, who will thrill to the elaborate "mecha" (mechanical fighting machines), the melodrama, and the attractive characters. Gundam Wing offers adolescent and teen sci-fi fans a beautifully animated and imaginative array of technological warfare, covert operations, and teen melodrama in a story that's compelling, if occasionally confusing. Children younger than that (6-8) will be enthralled with the series as well for its constant action, but parents may balk at exposing their children to the series' nonstop military combat. For American audiences, the biggest problem may be the excessive militarism and the stubborn prevalence of the Japanese notion that the highest military ideal is to die in the service of one's cause.

The series promotes the idea that the highest military ideal is to die in the service of one's cause.