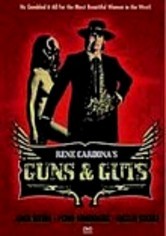 1974 R 1h 38m DVD
The title sums up the action-driven plot in this blood-splattered Western directed by Rene Cardona Jr. A gunslinger would like nothing better than to retire and live with the prostitute who stole his heart, but he's obliged to wrap up his final contract killing: a sheriff who's holed up inside an old monastery. The cast includes Jorge Rivero, Pedro Armendariz, Rogelio Guerra, Zulma Faiad, Quintin Bulnes and Chano Urueta.