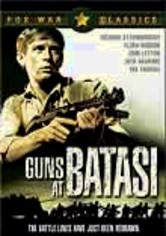 1964 NR 1h 43m DVD
Richard Attenborough won a British Academy Award, and Mia Farrow took home a Golden Globe for her performance in this drama depicting the decolonization of Africa. When the British colony under Sgt. Lauderdale's (Attenborough) charge declares its independence, he must maintain order during the governmental transition. But as the political situation grows increasingly complex, the stalwart soldier begins to question long-held values.