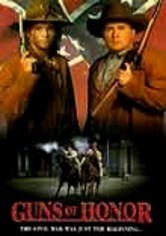 1994 R 1h 35m DVD
In 1867, an ex-Confederate general, Jackson Hardin (Martin Sheen), still holds a grudge against the Union. He and his legendary "Floating Outfit" refuse to let the ravages of war dictate how they'll live in the impoverished South. Across the Rio Grande, a French army divides the occupied Mexican nation and casts an avaricious glance on the weakened American states. It's up to Hardin and his "guns of honor" to stave off these would-be occupiers.