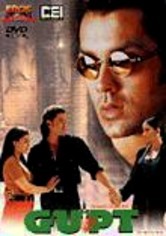 1997 NR 3h 0m DVD
Saahil (Bobby Deol) is at odds with the governor (Raj Babbar), who just so happens to be his stepfather. After the governor tries to force Saahil to marry Sheetal (Manisha Koirala), Saahil wants to kill him. But when his stepfather actually does turn up dead, Saahil is wrongly accused. Now, he must race to find the real killer before a surly inspector (Om Puri) finds him. Rajiv Rai directs this award-winning film with music by Viju Shah.