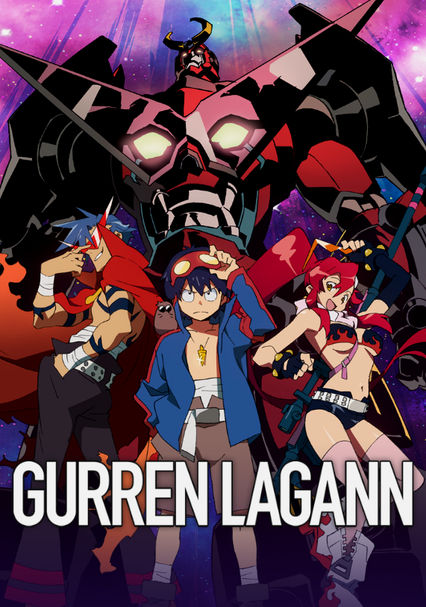 2007 TV-14 5 seasons
Young laborer Simon dreams of seeing the world aboveground, but when his wish comes true, he finds a violent land in which humans battle robots controlled by a vicious noble. Simon and his friends become mighty warriors who battle for their freedom.

Living in a future where human beings dwell in underground villages, orphans Kamina and Simon dream of visiting the world on the surface of the planet. As luck would have it, Simon discovers a giant robot that allows them to fulfill that wish.

The second half of this popular anime series finds Simon mourning the death of Kamina, while the earth begins to repopulate and mankind once again prospers, following the battle between Team Dai-Gurren and Lord Genome's robot forces. At Simon's side is the mysterious Nia, a beautiful young girl he discovered hidden in a crate. But a new threat emerges with the arrival of the Anti-Spiral forces and news of an impending natural disaster.

With Lord Genome long since defeated, Simon and Team Dai-Gurren focus on maintaining the prosperity of Kamina City. However, the sudden resurfacing of the malicious Anti-Spirals threatens mankind's safety and forces Simon to fight once again. Separated from his beloved Nia and besieged by dangerous enemies, Simon turns to his former foe Viral for help in saving the planet.

Simon never dreamed there was an entire world lurking above his head, even though his friend Kamina's been saying it all along. So when the ceiling collapses, exposing a strange and unfamiliar surface land, they jump at the chance to explore it. But danger awaits in the form of the evil Spiral King, who's launched his army of Beastmen to fight them. This feature-length anime originally ran as a series of episodes on Japanese television.

It's been seven years since Simon and his team of rebels took down the Spiral King in an epic battle that cost Kamina his life. But now human prosperity has summoned a brand-new enemy: the Anti-Spirals. With collective despair at an all-time high, can Team Dai-Gurren band together again to beat back a wave of certain destruction? This is the second feature-length anime in the Gurren Lagann series.