H.G. Wells' The War of the Worlds: The Real Story 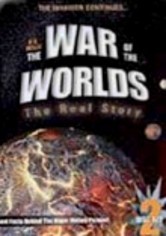 H.G. Wells' The War of the Worlds: The Real Story

2005 NR 2 discs
This spellbinding documentary examines the H.G. Wells novel &NFiThe War of the Worlds&NFi_; and the worldwide phenomenon it created when it was first published. The doomsday tale of aliens overrunning Earth has served as inspiration for scores of other sci-fi stories, plus renditions including the legendary Orson Welles 1938 radio play and, most recently, Steven Spielberg's opus starring Tom Cruise, Tim Robbins and Dakota Fanning.